Spanish is the predominant language in the Latino news media industry. We found that 484 outlets, more than 77 percent of the total identified, offer content exclusively in Spanish. 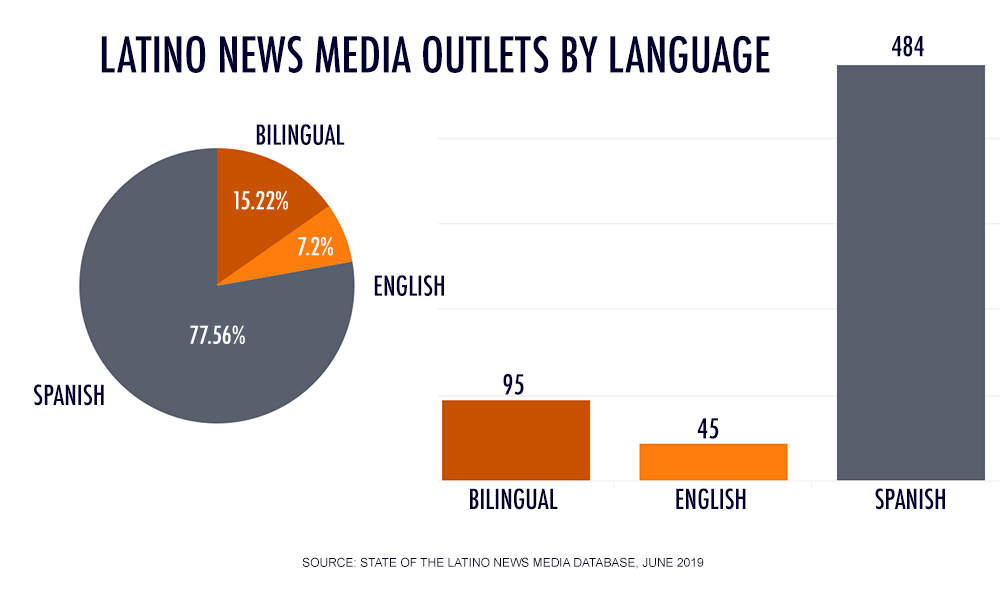 This may seem obvious. Spanish is the country’s most spoken language after English, and the U.S. has the second-largest Spanish-speaking population in the world. More than 37 million Latinxs over the age of five years speak Spanish at home, and almost 90 percent of foreign-born Latinxs prefer to get at least some of their news from Spanish-language sources. But those Latinxs make up only about a third of the Latino population in the country.

If growth continues to come from domestic births rather than immigration, as predicted, should the future of Latino news media be conceived in English or in a kind of bilingual version? Spanish-language media will still have a large and crucial role to play for many years, since the number of Spanish speakers is growing. But the share of Latinxs who speak Spanish is shrinking. Several news media companies that serve Latinxs in Spanish are struggling to find the language and “voice” to engage these young Latino people.

About 15 percent of the outlets we found, a total of 95, use both English and Spanish to reach their audiences. Most are newspapers with accompanying websites. The strategy, our interviews revealed, seems to be to have content available for non-Spanish-speaking members of the community as a way of creating awareness on Latino issues. The problem with this strategy, as Carbajal from Al Día in Dallas told us, is that “you are trying to reach out to two very different audiences at once.”

Only about 7 percent of identified outlets, a total of 45, produce content exclusively in English. These are based mainly in California, Florida and New York. Four are print newspapers — one in California (La Nueva Voz), another one in New York (Hudson Valley Press), and two in Puerto Rico. (See our section on Puerto Rico.)

Just eight magazines out of 32 publish in English, and seven publish in both English and Spanish. And over half of the English-only outlets (29 out of 45) are digital publications or in new formats. These include seven podcasts and two newsletters. Again, most are based in California, Florida and New York.

Probably the most ambitious attempt by a traditional Spanish-language media company to reach young Latinxs in English is Fusion, a cable-TV network with programming conceived for millennial Latinos but ultimately launched in October 2013 in partnership with ABC as a channel for all millennials. It did not attract the expected audience or the advertising revenue and ended up losing tens of millions of dollars. Three years after its launch, ABC left the partnership.

There is also the opposite phenomenon: English-language publications reaching out to Latinxs in Spanish, providing both original content and translations of the content they produce for English speakers. For the purposes of this report, we identified 22 newspapers and one magazine published in Spanish by Anglo media corporations serving U.S. Latino communities. (See the full list in the Appendix.) These are spread out across the country, from California to Miami, in cities with large Latino populations. We did not include outlets that only translate content from English into Spanish; they do not meet our news outlet criteria. We find that such translation without adaptation tends to lack cultural relevance.